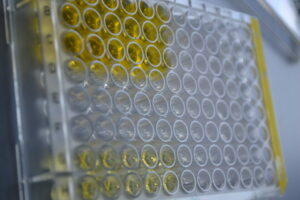 The Multiple System Atrophy (MSA) Trust has organised an MSA Research Symposium focussed on new research findings from pathology to new biomarker development and therapies for this devastating orphan disease. MSA is a rare, progressive, fatal disorder that makes muscles stiff (rigid) and causes problems with movement, loss of coordination, and malfunction of internal body processes (such as blood pressure and bladder control).

Dr. Farid Khan, CEO pf PharmaKure Limited , will deliver a key note on, ‘Early diagnostic studies of oligomeric amyloid and other biomarkers for proteinopathies, including MSA’. He will highlight different biomarkers in Alzheimer’s and Parkinson’s patients and compare these to MSA patients.

‘We found a signature of abnormal aggregating proteins in the blood of MSA patients’ explained Dr. Farid Khan, an expert in protein mis-folding diseases. Dr. Khan further explained, ‘the test will allow us to diagnosis patients much earlier, as the amounts of detected proteins are higher than in other diseases, such as Alzheimer’s or Parkinson’s Disease. Our hypothesis is that the excess formation and accumulation of toxic aggregated proteins kills nerve cells…. causing degeneration in many areas of the brain. These are the classic symptoms of MSA: deterioration of movement, balance and autonomic functions of the body, such as bladder and blood pressure control.’

‘These results are important because early diagnosis can lead to effective treatment-especially as drugs already exist which can disrupt the toxic protein build-up. These results have opened up not only the possibility of early diagnosis, but also a potential treatment for this devastating disease.’

‘We thank the Manx and UK MSA trusts and UCL for clinical samples, and we look forward increasing the number of trial participants towards the development of an accurate diagnosis.’

Multiple Systems Atrophy (MSA) is a rare neurodegenerative disease that exhibits toxic protein-based inclusions in certain specific regions of the brain; in MSA, these are in the glial cells. These “glial scars” are composed of aggregates of the protein alpha-synuclein. MSA patients exhibit movement disorders and so there is some similarity with the Lewy Body diseases, such as Parkinson’s Disease or Dementia with Lewy Bodies, which also involve aggregation and deposition of alpha-synuclein in the brain. Patients in the early stages of MSA are often misdiagnosed as having Parkinson’s, leading to a poor treatment outcome. There is currently no specific and unequivocal method to diagnose MSA and this problem can persist for several years before the definitive diagnosis is made. The prevalence of MSA in the US is between 3.4-4.9 cases per 100,000 population. The mean incidence is 0.6-0.7 cases per 100,000 per year. Thus, MSA meets orphan disease status in the US, with 17000 existing cases and 2450 new cases per year. In the EU, the prevalence is 3.3 per 100,000 population and the incidence is 0.6 cases per 100,000 per year, resulting in 2300 cases in the UK at present.

PharmaKure is a UK based pharmaceutical company, spun out from the University of Manchester. The company is actively researching, developing, commercialising and repositioning repurposed drugs for the treatment of Alzheimer’s, Parkinson’s and other neurodegenerative diseases. Additionally, the company is developing companion diagnostics which are blood-based tests (ALZmetrixTM) that measure the levels of biomarkers associated with Alzheimer’s Disease, Parkinson’s Disease and Multiple Systems Atrophy.