PharmaKure has launched a study to identify blood-based biomarkers in patients with Alzheimer’s Disease. 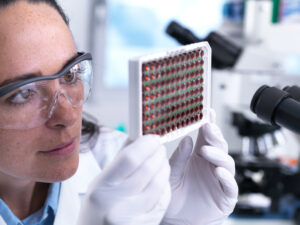 Manchester, United Kingdom 4th October 2022 – The study will test levels of blood biomarkers for stratification of Alzheimer’s disease patients, who already have been tested with other diagnostic methods, either brain imaging by PET or amyloid deposits in cerebrospinal fluid (CSF).

Certain blood biomarkers of amyloid-ß (Total, Aß40 and Aß42), aggregated α-synuclein, aggregated Tau (Total and pTAU (181), NFL and DJ-1 have been associated with Alzheimer’s Disease pathology.  This study is to evaluate the relationship of aggregated forms of all these biomarkers in patient blood compared to historical PET scan and CSF findings.

The study has been launched in October 2022. Participants will be aged 50 to 80, and have had an Amyloid PET scan or CSF Amyloid assessment in the last five years that gave amyloid-positive results.

‘This study may lead to future blood tests that could help with earlier diagnosis of Alzheimer’s disease and monitor disease progression,’ said Dr Farid Khan, CEO at PharmaKure. ‘For clinicians to have this ability could lead to better population-based health outcomes, lower health system costs and improve quality of life of patients by offering treatments earlier’.

‘Blood tests give further understanding of Alzheimer’s Disease pathology and an insight into formulating strategies for improving clinical outcomes by selecting future treatments that are tailored to the right patient groups’, said Professor Andrew Doig of Manchester University & co-founder of PharmaKure. ‘In the progression of Alzheimer’s Disease, it is not clear whether blood biomarkers are associated with brain imaging scans or amyloid in the CSF.  This study could enable us to learn how to get early warning signs of cognitive decline in blood’.

About Alzheimer’s Disease
Alzheimer’s disease is a fatal illness that causes progressive decline in memory and other aspects of cognition. Dementia due to Alzheimer’s is the most common form of dementia, accounting for 60 to 80 percent of all cases. Every 3 seconds someone in the world develops dementia. 850,000 (UK) and 44 million (worldwide) are suffering from Alzheimer’s or dementia related illnesses. In 2020, the total cost of cost of care for people with dementia in the UK is £34.7 billion. Globally, the cost was $360 billion and by 2050 the costs could be a $1 trillion (source Alzheimer’s Research UK).  In the US alone, there was an increase of 8 million new caregivers from 2015 to 2020. The current annual societal and economic cost of dementia is estimated as $1 trillion, an amount that is expected to double by 2030 unless we find a way to slow the disease.

PharmaKure is a UK based pharmaceutical company, spun out from the University of Manchester. The Company is actively researching, developing, commercializing and repositioning repurposed drugs for the treatment of Alzheimer’s, Parkinson’s and other neurodegenerative diseases. Additionally, the Company is developing companion diagnostics which are blood-based tests (ALZmetrix TM) that measure the levels of biomarkers associated with Alzheimer’s Disease (AD).